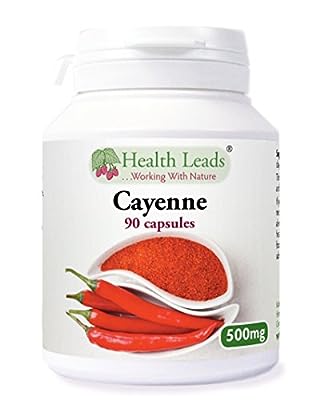 With a whole load of good value supplement products on offer these days, it is good to have a manufacturer you can rely on. this product is certainly that and will be a great acquisition.

For this good buy, the product comes broadly recommended and is a regular choice amongst most of our customers. They have added some first-rate touches and this equals good reasonable price.

What is cayenne pepper?

Cayenne is the fruit of the Capsicum plant. Cayenne is a spice well known for its fiery hot taste. It is also known as cayenne pepper, red pepper, red hot chilli pepper, chilli pepper, paprika, chilli, guinea spice, cow horn pepper, aleva and bird pepper. In the America's, dating back to 7500 BC, chilli peppers have been used in the human diet, and it was Christopher Columbus who was the first European to discover them. On his second visit to the West Indies, Columbus' physician Diego Alvarez Chanca brought back to Spain the first chilli peppers.

The capsaicin in cayenne pepper

The fruits of all capsicum plants except one (bell pepper) contain capsaicin (the chemical name is methyl vanillyl nonenamide). This is the component chemical that produces the heat or burning sensation when consumed. The highest concentration of capsaicin is found in the white pith around the seeds.

Not all chilli peppers contain the same amount of capsaicin. The Scoville scale is used to measure the heat of a chilli pepper and it was in 1912 that Wilbur Scoville designed the Scoville organoleptic test.

How hot are our cayenne pepper supplements?

Our cayenne pepper has been rated at 37,800 scoville heat units.

We are one of the leading additive free supplement manufacturers in the UK. Our cayenne pepper contains 100% cayenne pepper and the vegetarian capsule, nothing else. We do not use fillers or bulking agents in our supplements as it is well documented that these can affect the absorbency of nutrients and so decrease the effectiveness.