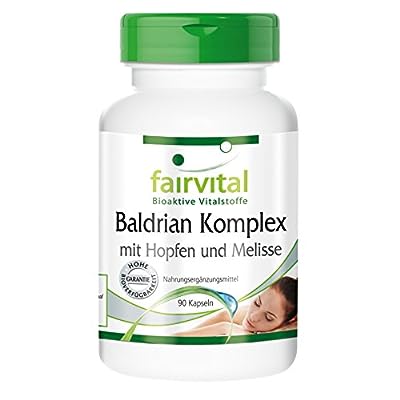 We are pleased to present the nourishing Fairvital - Valerian Complex with Hops & Lemon Balm - 90 Vegetarian Capsules.

With so many available recently, it is wise to have a product you can trust. The Fairvital - Valerian Complex with Hops & Lemon Balm - 90 Vegetarian Capsules is certainly that and will be a perfect acquisition.

For this great price, the Fairvital - Valerian Complex with Hops & Lemon Balm - 90 Vegetarian Capsules comes widely recommended and is always a regular choice for most people. fairvital have included some great touches and this equals great value for money.

Research indicates that taking a mix of hops and valerian may compensate for the negative influence of caffeine on the ability to fall asleep. In a pilot study, 48 healthy male volunteers between the ages of 18 and 35 received 200mg of caffeine. Already half an hour after the caffeine intake, the EEG showed specific changes: the test subjects were visibly nervous. Test subjects who subsequently received a hops and valerian mix showed a compensating effect to the influence of the caffeine, dependent on the dosage. The EEG then again displayed alpha waves (indicating relaxation). The neutralising effect is seen as proof that caffeine suppresses the A1 receptor. In the authors' view, this fulfils all the requirements for an undisturbed night of sleep. Whoever is feeling restless or tense will also find a reliable aid in the three herbs valerian, hops and lemon balm. Free of lactose, fructose and gluten; vegetarian
View our full range of Fairvital products